1Now a certain man was sick, Lazarus from Bethany, of the village of Mary and her sister, Martha. 2It was that Mary who had anointed the Lord with ointment and wiped his feet with her hair, whose brother Lazarus, was sick. 3The sisters therefore sent to him, saying, “Lord, behold, he for whom you have great affection is sick.”

4But when Jesus heard it, he said, “This sickness is not to death, but for the glory of God, that God’s Son may be glorified by it.”5Now Jesus loved Martha, and her sister, and Lazarus. 6When therefore he heard that he was sick, he stayed two days in the place where he was. 7Then after this he said to the disciples, “Let’s go into Judea again.”

8The disciples asked him, “Rabbi, the Jews were just trying to stone you. Are you going there again?”

9Jesus answered, “Aren’t there twelve hours of daylight? If a man walks in the day, he doesn’t stumble, because he sees the light of this world.10But if a man walks in the night, he stumbles, because the light isn’t in him.”11He said these things, and after that, he said to them, “Our friend Lazarus, has fallen asleep, but I am going so that I may awake him out of sleep.”

12The disciples therefore said, “Lord, if he has fallen asleep, he will recover.”

13Now Jesus had spoken of his death, but they thought that he spoke of taking rest in sleep. 14So Jesus said to them plainly then, “Lazarus is dead.15I am glad for your sakes that I was not there, so that you may believe. Nevertheless, let’s go to him.”

16Thomas therefore, who is called Didymus, said to his fellow disciples, “Let’s also go, that we may die with him.”

17So when Jesus came, he found that he had been in the tomb four days already. 18Now Bethany was near Jerusalem, about fifteen stadia away. 19Many of the Jews had joined the women around Martha and Mary, to console them concerning their brother. 20Then when Martha heard that Jesus was coming, she went and met him, but Mary stayed in the house. 21Therefore Martha said to Jesus, “Lord, if you would have been here, my brother wouldn’t have died. 22Even now I know that whatever you ask of God, God will give you.”

23Jesus said to her, “Your brother will rise again.”

24Martha said to him, “I know that he will rise again in the resurrection at the last day.”

27She said to him, “Yes, Lord. I have come to believe that you are the Christ, God’s Son, he who comes into the world.”

28When she had said this, she went away and called Mary, her sister, secretly, saying, “The Teacher is here and is calling you.”

29When she heard this, she arose quickly and went to him. 30Now Jesus had not yet come into the village, but was in the place where Martha met him. 31Then the Jews who were with her in the house and were consoling her, when they saw Mary, that she rose up quickly and went out, followed her, saying, “She is going to the tomb to weep there.”

32Therefore when Mary came to where Jesus was and saw him, she fell down at his feet, saying to him, “Lord, if you would have been here, my brother wouldn’t have died.”

33When Jesus therefore saw her weeping, and the Jews weeping who came with her, he groaned in the spirit and was troubled, 34and said, “Where have you laid him?”

36The Jews therefore said, “See how much affection he had for him!” 37Some of them said, “Couldn’t this man, who opened the eyes of him who was blind, have also kept this man from dying?”

38Jesus therefore, again groaning in himself, came to the tomb. Now it was a cave, and a stone lay against it. 39Jesus said, “Take away the stone.”

Martha, the sister of him who was dead, said to him, “Lord, by this time there is a stench, for he has been dead four days.”

40Jesus said to her, “Didn’t I tell you that if you believed, you would see God’s glory?”

41So they took away the stone from the place where the dead man was lying. Jesus lifted up his eyes and said, “Father, I thank you that you listened to me.42I know that you always listen to me, but because of the multitude standing around I said this, that they may believe that you sent me.”43When he had said this, he cried with a loud voice, “Lazarus, come out!”

44He who was dead came out, bound hand and foot with wrappings, and his face was wrapped around with a cloth.

Jesus said to them, “Free him, and let him go.”

45Therefore many of the Jews who came to Mary and saw what Jesus did believed in him. 46But some of them went away to the Pharisees and told them the things which Jesus had done. 47The chief priests therefore and the Pharisees gathered a council, and said, “What are we doing? For this man does many signs. 48If we leave him alone like this, everyone will believe in him, and the Romans will come and take away both our place and our nation.”

49But a certain one of them, Caiaphas, being high priest that year, said to them, “You know nothing at all, 50nor do you consider that it is advantageous for us that one man should die for the people, and that the whole nation not perish.” 51Now he didn’t say this of himself, but being high priest that year, he prophesied that Jesus would die for the nation, 52and not for the nation only, but that he might also gather together into one the children of God who are scattered abroad. 53So from that day forward they took counsel that they might put him to death. 54Jesus therefore walked no more openly among the Jews, but departed from there into the country near the wilderness, to a city called Ephraim. He stayed there with his disciples.

55Now the Passover of the Jews was at hand. Many went up from the country to Jerusalem before the Passover, to purify themselves. 56Then they sought for Jesus and spoke with one another as they stood in the temple, “What do you think—that he isn’t coming to the feast at all?” 57Now the chief priests and the Pharisees had commanded that if anyone knew where he was, he should report it, that they might seize him. 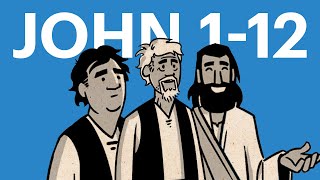