1“Hear this, house of Jacob,

you who are called by the name of Israel,

and have come out of the waters of Judah.

You swear by the LORD’s name,

and make mention of the God of Israel,

but not in truth, nor in righteousness—

2for they call themselves citizens of the holy city,

and rely on the God of Israel;

the LORD of Hosts is his name.

3I have declared the former things from of old.

Yes, they went out of my mouth, and I revealed them.

I did them suddenly, and they happened.

4Because I knew that you are obstinate,

and your neck is an iron sinew,

and your brow bronze;

5therefore I have declared it to you from of old;

before it came to pass I showed it to you;

lest you should say, ‘My idol has done them.

My engraved image and my molten image has commanded them.’

6You have heard it.

Now see all this.

And you, won’t you declare it?

“I have shown you new things from this time,

even hidden things, which you have not known.

7They are created now, and not from of old.

Before today, you didn’t hear them,

Yes, from of old your ear was not opened,

for I knew that you dealt very treacherously,

and were called a transgressor from the womb.

9For my name’s sake, I will defer my anger,

and for my praise, I hold it back for you

so that I don’t cut you off.

10Behold, I have refined you,

but not as silver.

I have chosen you in the furnace of affliction.

for my own sake, I will do it;

for how would my name be profaned?

I will not give my glory to another.

and Israel my called:

I am the first.

I am also the last.

13Yes, my hand has laid the foundation of the earth,

and my right hand has spread out the heavens.

when I call to them, they stand up together.

14“Assemble yourselves, all of you, and hear!

He whom the LORD loves will do what he likes to Babylon,

and his arm will be against the Kasdim.

Yes, I have called him.

I have brought him

and he shall make his way prosperous.

“From the beginning I have not spoken in secret;

from the time that it happened, I was there.”

Now the Lord GOD has sent me

the Holy One of Israel, says:

“I am the LORD your God,

who leads you by the way that you should go.

18Oh that you had listened to my commandments!

Then your peace would have been like a river

and your righteousness like the waves of the sea.

19Your offspring also would have been as the sand

and the descendants of your body like its grains.

His name would not be cut off nor destroyed from before me.”

Flee from the Kasdim!

With a voice of singing announce this,

tell it even to the end of the earth;

say, “The LORD has redeemed his servant Jacob!”

21They didn’t thirst when he led them through the deserts.

He caused the waters to flow out of the rock for them.

He also split the rock and the waters gushed out. 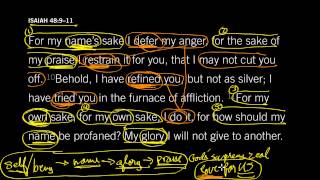