1Paul, an emissary of Messiah Yeshua through the will of God, to the holy ones who are at Ephesus, and the faithful in Messiah Yeshua: 2Grace to you and peace from God our Father and the Lord Yeshua the Messiah.

3Blessed be the God and Father of our Lord Yeshua the Messiah, who has blessed us with every spiritual blessing in the heavenly places in Messiah, 4even as he chose us in him before the foundation of the world, that we would be holy and without defect before him in love, 5having predestined us for adoption as children through Yeshua the Messiah to himself, according to the good pleasure of his desire, 6to the praise of the glory of his grace, by which he freely gave us favor in the Beloved. 7In him we have our redemption through his blood, the forgiveness of our trespasses, according to the riches of his grace 8which he made to abound toward us in all wisdom and prudence, 9making known to us the mystery of his will, according to his good pleasure which he purposed in him 10to an administration of the fullness of the times, to sum up all things in Messiah, the things in the heavens and the things on the earth, in him. 11We were also assigned an inheritance in him, having been foreordained according to the purpose of him who does all things after the counsel of his will, 12to the end that we should be to the praise of his glory, we who had before hoped in Messiah. 13In him you also, having heard the word of the truth, the Good News of your salvation—in whom, having also believed, you were sealed with the promised Holy Spirit, 14who is a pledge of our inheritance, to the redemption of God’s own possession, to the praise of his glory.

15For this cause I also, having heard of the faith in the Lord Yeshua which is among you and the love which you have toward all the holy ones, 16don’t cease to give thanks for you, making mention of you in my prayers, 17that the God of our Lord Yeshua the Messiah, the Father of glory, may give to you a spirit of wisdom and revelation in the knowledge of him, 18having the eyes of your hearts enlightened, that you may know what is the hope of his calling, and what are the riches of the glory of his inheritance in the holy ones, 19and what is the exceeding greatness of his power toward us who believe, according to that working of the strength of his might 20which he worked in Messiah when he raised him from the dead and made him to sit at his right hand in the heavenly places, 21far above all rule, authority, power, dominion, and every name that is named, not only in this age, but also in that which is to come. 22He put all things in subjection under his feet, and gave him to be head over all things for the assembly, 23which is his body, the fullness of him who fills all in all. 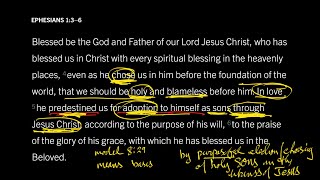 How Do Predestination and Election Relate? Ephe... 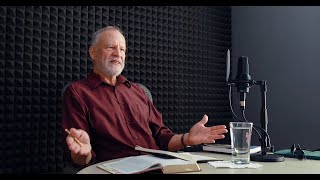 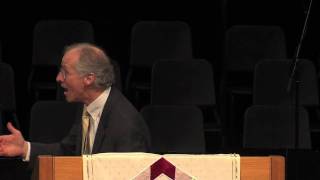 "The Immeasurable Greatness Of His Power Toward Us" Ephesians 1:15-23 April... 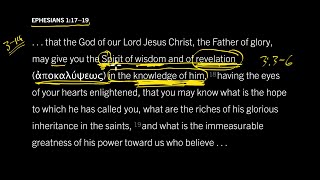