1And God blessed Noah and his sons, and said to them, “Be fruitful and multiply, and fill the earth. 2The fear of you and the dread of you shall be upon every beast of the earth, and upon every bird of the air, upon everything that creeps on the ground and all the fish of the sea; into your hand they are delivered. 3Every moving thing that lives shall be food for you; and as I gave you the green plants, I give you everything. 4Only you shall not eat flesh with its life, that is, its blood. 5For your lifeblood I will surely require a reckoning; of every beast I will require it and of man; of every man’s brother I will require the life of man. 6Whoever sheds the blood of man, by man shall his blood be shed; for God made man in his own image. 7And you, be fruitful and multiply, bring forth abundantly on the earth and multiply in it.”

18The sons of Noah who went forth from the ark were Shem, Ham, and Japheth. Ham was the father of Canaan. 19These three were the sons of Noah; and from these the whole earth was peopled.

20Noah was the first tiller of the soil. He planted a vineyard; 21and he drank of the wine, and became drunk, and lay uncovered in his tent. 22And Ham, the father of Canaan, saw the nakedness of his father, and told his two brothers outside. 23Then Shem and Japheth took a garment, laid it upon both their shoulders, and walked backward and covered the nakedness of their father; their faces were turned away, and they did not see their father’s nakedness. 24When Noah awoke from his wine and knew what his youngest son had done to him, 25he said,

a slave of slaves shall he be to his brothers.”

“Blessed by the Lord my God be Shem;

and let Canaan be his slave.

and let him dwell in the tents of Shem;

and let Canaan be his slave.” 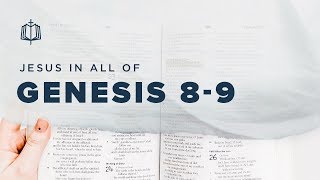