1“At that time,” declares the Lord, “I will be the God of all the families of Israel, and they will be my people.”

2This is what the Lord says:

“The people who survive the sword

will find favor in the wilderness;

I will come to give rest to Israel.”

3The Lord appeared to us in the past, saying:

“I have loved you with an everlasting love;

I have drawn you with unfailing kindness.

4I will build you up again,

and you, Virgin Israel, will be rebuilt.

Again you will take up your timbrels

and go out to dance with the joyful.

5Again you will plant vineyards

on the hills of Samaria;

the farmers will plant them

and enjoy their fruit.

6There will be a day when watchmen cry out

on the hills of Ephraim,

7This is what the Lord says:

“Sing with joy for Jacob;

shout for the foremost of the nations.

Make your praises heard, and say,

‘ Lord, save your people,

the remnant of Israel.’

8See, I will bring them from the land of the north

and gather them from the ends of the earth.

Among them will be the blind and the lame,

expectant mothers and women in labor;

a great throng will return.

9They will come with weeping;

they will pray as I bring them back.

I will lead them beside streams of water

on a level path where they will not stumble,

because I am Israel’s father,

and Ephraim is my firstborn son.

10“Hear the word of the Lord, you nations;

proclaim it in distant coastlands:

‘He who scattered Israel will gather them

and will watch over his flock like a shepherd.’

11For the Lord will deliver Jacob

and redeem them from the hand of those stronger than they.

12They will come and shout for joy on the heights of Zion;

they will rejoice in the bounty of the Lord—

the grain, the new wine and the olive oil,

the young of the flocks and herds.

and they will sorrow no more.

13Then young women will dance and be glad,

young men and old as well.

I will turn their mourning into gladness;

I will give them comfort and joy instead of sorrow.

14I will satisfy the priests with abundance,

and my people will be filled with my bounty,”

15This is what the Lord says:

Rachel weeping for her children

and refusing to be comforted,

16This is what the Lord says:

“Restrain your voice from weeping

for your work will be rewarded,”

“They will return from the land of the enemy.

17So there is hope for your descendants,”

“Your children will return to their own land.

18“I have surely heard Ephraim’s moaning:

and I have been disciplined.

Restore me, and I will return,

because you are the Lord my God.

after I came to understand,

I beat my breast.

I was ashamed and humiliated

because I bore the disgrace of my youth.’

20Is not Ephraim my dear son,

the child in whom I delight?

Though I often speak against him,

I still remember him.

Therefore my heart yearns for him;

I have great compassion for him,”

Take note of the highway,

the road that you take.

return to your towns.

22How long will you wander,

The Lord will create a new thing on earth—

the woman will return to the man.”

23This is what the Lord Almighty, the God of Israel, says: “When I bring them back from captivity, the people in the land of Judah and in its towns will once again use these words: ‘The Lord bless you, you prosperous city, you sacred mountain.’ 24People will live together in Judah and all its towns—farmers and those who move about with their flocks. 25I will refresh the weary and satisfy the faint.”

26At this I awoke and looked around. My sleep had been pleasant to me.

27“The days are coming,” declares the Lord, “when I will plant the kingdoms of Israel and Judah with the offspring of people and of animals. 28Just as I watched over them to uproot and tear down, and to overthrow, destroy and bring disaster, so I will watch over them to build and to plant,” declares the Lord. 29“In those days people will no longer say,

‘The parents have eaten sour grapes,

30Instead, everyone will die for their own sin; whoever eats sour grapes—their own teeth will be set on edge.

31“The days are coming,” declares the Lord,

“when I will make a new covenant

with the people of Israel

and with the people of Judah.

I made with their ancestors

when I took them by the hand

to lead them out of Egypt,

because they broke my covenant,

though I was a husband to them,”

after that time,” declares the Lord.

“I will put my law in their minds

and write it on their hearts.

and they will be my people.

34No longer will they teach their neighbor,

or say to one another, ‘Know the Lord,’

because they will all know me,

from the least of them to the greatest,”

“For I will forgive their wickedness

and will remember their sins no more.”

35This is what the Lord says,

he who appoints the sun

to shine by day,

who decrees the moon and stars

to shine by night,

who stirs up the sea

so that its waves roar—

the Lord Almighty is his name:

36“Only if these decrees vanish from my sight,”

“will Israel ever cease

being a nation before me.”

37This is what the Lord says:

“Only if the heavens above can be measured

and the foundations of the earth below be searched out

will I reject all the descendants of Israel

because of all they have done,”

38“The days are coming,” declares the Lord, “when this city will be rebuilt for me from the Tower of Hananel to the Corner Gate. 39The measuring line will stretch from there straight to the hill of Gareb and then turn to Goah. 40The whole valley where dead bodies and ashes are thrown, and all the terraces out to the Kidron Valley on the east as far as the corner of the Horse Gate, will be holy to the Lord. The city will never again be uprooted or demolished.” 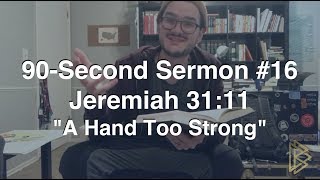