1An attacker advances against you, Nineveh.

marshal all your strength!

2The Lord will restore the splendor of Jacob

though destroyers have laid them waste

and have ruined their vines.

3The shields of the soldiers are red;

the warriors are clad in scarlet.

The metal on the chariots flashes

on the day they are made ready;

the spears of juniper are brandished.

4The chariots storm through the streets,

rushing back and forth through the squares.

yet they stumble on their way.

They dash to the city wall;

the protective shield is put in place.

6The river gates are thrown open

and the palace collapses.

7It is decreed that Nineveh

be exiled and carried away.

and beat on their breasts.

whose water is draining away.

but no one turns back.

The supply is endless,

the wealth from all its treasures!

10She is pillaged, plundered, stripped!

11Where now is the lions’ den,

the place where they fed their young,

where the lion and lioness went,

and the cubs, with nothing to fear?

12The lion killed enough for his cubs

and strangled the prey for his mate,

filling his lairs with the kill

and his dens with the prey.

“I will burn up your chariots in smoke,

and the sword will devour your young lions.

I will leave you no prey on the earth.

The voices of your messengers

will no longer be heard.” 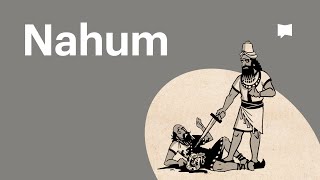