1“Make the tabernacle with ten curtains of finely twisted linen and blue, purple and scarlet yarn, with cherubim woven into them by a skilled worker. 2All the curtains are to be the same size—twenty-eight cubits long and four cubits wide. 3Join five of the curtains together, and do the same with the other five. 4Make loops of blue material along the edge of the end curtain in one set, and do the same with the end curtain in the other set. 5Make fifty loops on one curtain and fifty loops on the end curtain of the other set, with the loops opposite each other. 6Then make fifty gold clasps and use them to fasten the curtains together so that the tabernacle is a unit.

7“Make curtains of goat hair for the tent over the tabernacle—eleven altogether. 8All eleven curtains are to be the same size—thirty cubits long and four cubits wide. 9Join five of the curtains together into one set and the other six into another set. Fold the sixth curtain double at the front of the tent. 10Make fifty loops along the edge of the end curtain in one set and also along the edge of the end curtain in the other set. 11Then make fifty bronze clasps and put them in the loops to fasten the tent together as a unit. 12As for the additional length of the tent curtains, the half curtain that is left over is to hang down at the rear of the tabernacle. 13The tent curtains will be a cubit longer on both sides; what is left will hang over the sides of the tabernacle so as to cover it. 14Make for the tent a covering of ram skins dyed red, and over that a covering of the other durable leather.

30“Set up the tabernacle according to the plan shown you on the mountain.

31“Make a curtain of blue, purple and scarlet yarn and finely twisted linen, with cherubim woven into it by a skilled worker. 32Hang it with gold hooks on four posts of acacia wood overlaid with gold and standing on four silver bases. 33Hang the curtain from the clasps and place the ark of the covenant law behind the curtain. The curtain will separate the Holy Place from the Most Holy Place. 34Put the atonement cover on the ark of the covenant law in the Most Holy Place. 35Place the table outside the curtain on the north side of the tabernacle and put the lampstand opposite it on the south side.

36“For the entrance to the tent make a curtain of blue, purple and scarlet yarn and finely twisted linen—the work of an embroiderer. 37Make gold hooks for this curtain and five posts of acacia wood overlaid with gold. And cast five bronze bases for them. 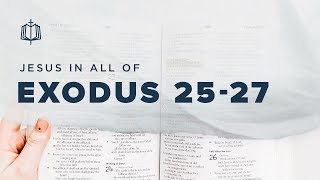 The Book of Exodus - Part 2

In Exodus, the Israelites come to Mt. Sinai, where God invites them into a co...

Did you know that Israel’s tabernacle tent was designed as a symbolic garden ...