1Nevertheless, there will be no more gloom for those who were in distress. In the past he humbled the land of Zebulun and the land of Naphtali, but in the future he will honor Galilee of the nations, by the Way of the Sea, beyond the Jordan—

2The people walking in darkness

have seen a great light;

on those living in the land of deep darkness

a light has dawned.

3You have enlarged the nation

and increased their joy;

they rejoice before you

as people rejoice at the harvest,

when dividing the plunder.

4For as in the day of Midian’s defeat,

the yoke that burdens them,

the bar across their shoulders,

the rod of their oppressor.

5Every warrior’s boot used in battle

and every garment rolled in blood

will be destined for burning,

will be fuel for the fire.

6For to us a child is born,

to us a son is given,

and the government will be on his shoulders.

And he will be called

7Of the greatness of his government and peace

there will be no end.

He will reign on David’s throne

and over his kingdom,

establishing and upholding it

with justice and righteousness

from that time on and forever.

The zeal of the Lord Almighty

The ’s Anger Against Israel

8The Lord has sent a message against Jacob;

it will fall on Israel.

9All the people will know it—

Ephraim and the inhabitants of Samaria—

who say with pride

and arrogance of heart,

10“The bricks have fallen down,

but we will rebuild with dressed stone;

the fig trees have been felled,

but we will replace them with cedars.”

11But the Lord has strengthened Rezin’s foes against them

and has spurred their enemies on.

12Arameans from the east and Philistines from the west

have devoured Israel with open mouth.

13But the people have not returned to him who struck them,

nor have they sought the Lord Almighty.

14So the Lord will cut off from Israel both head and tail,

both palm branch and reed in a single day;

15the elders and dignitaries are the head,

the prophets who teach lies are the tail.

16Those who guide this people mislead them,

and those who are guided are led astray.

17Therefore the Lord will take no pleasure in the young men,

nor will he pity the fatherless and widows,

for everyone is ungodly and wicked,

it consumes briers and thorns,

it sets the forest thickets ablaze,

so that it rolls upward in a column of smoke.

19By the wrath of the Lord Almighty

the land will be scorched

and the people will be fuel for the fire;

they will not spare one another.

20On the right they will devour,

but still be hungry;

on the left they will eat,

but not be satisfied.

Each will feed on the flesh of their own offspring:

21Manasseh will feed on Ephraim, and Ephraim on Manasseh;

together they will turn against Judah. 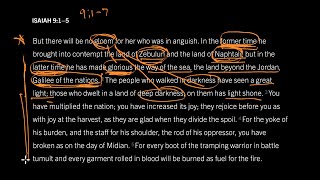