John the Baptist Prepares the Way

1In the fifteenth year of the reign of Tiberius Caesar—when Pontius Pilate was governor of Judea, Herod tetrarch of Galilee, his brother Philip tetrarch of Iturea and Traconitis, and Lysanias tetrarch of Abilene— 2during the high-priesthood of Annas and Caiaphas, the word of God came to John son of Zechariah in the wilderness. 3He went into all the country around the Jordan, preaching a baptism of repentance for the forgiveness of sins. 4As it is written in the book of the words of Isaiah the prophet:

“A voice of one calling in the wilderness,

‘Prepare the way for the Lord,

make straight paths for him.

5Every valley shall be filled in,

every mountain and hill made low.

The crooked roads shall become straight,

6And all people will see God’s salvation.’ ”

7John said to the crowds coming out to be baptized by him, “You brood of vipers! Who warned you to flee from the coming wrath? 8Produce fruit in keeping with repentance. And do not begin to say to yourselves, ‘We have Abraham as our father.’ For I tell you that out of these stones God can raise up children for Abraham. 9The ax is already at the root of the trees, and every tree that does not produce good fruit will be cut down and thrown into the fire.”

10“What should we do then?” the crowd asked.

12Even tax collectors came to be baptized. “Teacher,” they asked, “what should we do?”

13“Don’t collect any more than you are required to,” he told them.

14Then some soldiers asked him, “And what should we do?”

15The people were waiting expectantly and were all wondering in their hearts if John might possibly be the Messiah. 16John answered them all, “I baptize you with water. But one who is more powerful than I will come, the straps of whose sandals I am not worthy to untie. He will baptize you with the Holy Spirit and fire. 17His winnowing fork is in his hand to clear his threshing floor and to gather the wheat into his barn, but he will burn up the chaff with unquenchable fire.” 18And with many other words John exhorted the people and proclaimed the good news to them.

19But when John rebuked Herod the tetrarch because of his marriage to Herodias, his brother’s wife, and all the other evil things he had done, 20Herod added this to them all: He locked John up in prison.

The Baptism and Genealogy of Jesus

21When all the people were being baptized, Jesus was baptized too. And as he was praying, heaven was opened 22and the Holy Spirit descended on him in bodily form like a dove. And a voice came from heaven: “You are my Son, whom I love; with you I am well pleased.”

23Now Jesus himself was about thirty years old when he began his ministry. He was the son, so it was thought, of Joseph,

the son of God. 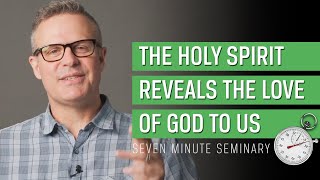 Alistair Begg - "A Strange Place for a Strange ...

Alistair Begg during Chapel, looks at four aspects of the ministry of John th...