1“I am the true vine, and my Father is the farmer.2Every branch in me that doesn’t bear fruit, he takes away. Every branch that bears fruit, he prunes, that it may bear more fruit.3You are already pruned clean because of the word which I have spoken to you.4Remain in me, and I in you. As the branch can’t bear fruit by itself unless it remains in the vine, so neither can you, unless you remain in me.5I am the vine. You are the branches. He who remains in me and I in him bears much fruit, for apart from me you can do nothing.6If a man doesn’t remain in me, he is thrown out as a branch and is withered; and they gather them, throw them into the fire, and they are burnt.7If you remain in me, and my words remain in you, you will ask whatever you desire, and it will be done for you.

8“In this my Father is glorified, that you bear much fruit; and so you will be my disciples.9Even as the Father has loved me, I also have loved you. Remain in my love.10If you keep my commandments, you will remain in my love, even as I have kept my Father’s commandments and remain in his love.11I have spoken these things to you, that my joy may remain in you, and that your joy may be made full.

12“This is my commandment, that you love one another, even as I have loved you.13Greater love has no one than this, that someone lay down his life for his friends.14You are my friends if you do whatever I command you.15No longer do I call you servants, for the servant doesn’t know what his lord does. But I have called you friends, for everything that I heard from my Father, I have made known to you.16You didn’t choose me, but I chose you and appointed you, that you should go and bear fruit, and that your fruit should remain; that whatever you will ask of the Father in my name, he may give it to you.

17“I command these things to you, that you may love one another.18If the world hates you, you know that it has hated me before it hated you.19If you were of the world, the world would love its own. But because you are not of the world, since I chose you out of the world, therefore the world hates you.20Remember the word that I said to you: ‘A servant is not greater than his lord.’If they persecuted me, they will also persecute you. If they kept my word, they will also keep yours.21But they will do all these things to you for my name’s sake, because they don’t know him who sent me.22If I had not come and spoken to them, they would not have had sin; but now they have no excuse for their sin.23He who hates me, hates my Father also.24If I hadn’t done amongst them the works which no one else did, they wouldn’t have had sin. But now they have seen and also hated both me and my Father.25But this happened so that the word may be fulfilled which was written in their law, ‘They hated me without a cause.’

26“When the Counsellorhas come, whom I will send to you from the Father, the Spirit of truth, who proceeds from the Father, he will testify about me.27You will also testify, because you have been with me from the beginning.

Francis Chan on What's Wrong with the Prosperit...

Francis Chan argues that the path and preaching of the prosperity gospel is d... 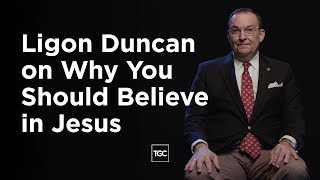 Ligon Duncan on Why You Should Believe in Jesus

Ligon Duncan claims that we can believe in Jesus because he alone knows all t...