1Am I not free? Am I not an emissary? Haven’t I seen Yeshua the Messiah, our Lord? Aren’t you my work in the Lord? 2If to others I am not an emissary, yet at least I am to you; for you are the seal of my office of emissary in the Lord.

3My defence to those who examine me is this: 4Have we no right to eat and to drink? 5Have we no right to take along a wife who is a believer, even as the rest of the emissaries, and the brothers of the Lord, and Kefa? 6Or have only Barnabas and I no right to not work? 7What soldier ever serves at his own expense? Who plants a vineyard, and doesn’t eat of its fruit? Or who feeds a flock, and doesn’t drink from the flock’s milk?

8Do I speak these things according to the ways of men? Or doesn’t the Torah also say the same thing? 9For it is written in the Torah of Moses, “You shall not muzzle an ox while it treads out the grain.” Is it for the oxen that God cares, 10or does he say it assuredly for our sake? Yes, it was written for our sake, because he who ploughs ought to plough in hope, and he who threshes in hope should partake of his hope. 11If we sowed to you spiritual things, is it a great thing if we reap your fleshly things? 12If others partake of this right over you, don’t we yet more? 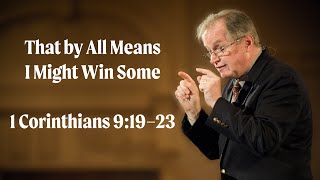 Don Carson | That By All Means I Might Win Some...