The Sons of Aaron

The Duties of the Levites

5Then the Lord spoke to Moses, saying: 6Bring the tribe of Levi near, and set them before Aaron the priest, so that they may assist him. 7They shall perform duties for him and for the whole congregation in front of the tent of meeting, doing service at the tabernacle; 8they shall be in charge of all the furnishings of the tent of meeting, and attend to the duties for the Israelites as they do service at the tabernacle. 9You shall give the Levites to Aaron and his descendants; they are unreservedly given to him from among the Israelites. 10But you shall make a register of Aaron and his descendants; it is they who shall attend to the priesthood, and any outsider who comes near shall be put to death.

A Census of the Levites

14Then the Lord spoke to Moses in the wilderness of Sinai, saying: 15Enroll the Levites by ancestral houses and by clans. You shall enroll every male from a month old and upward. 16So Moses enrolled them according to the word of the Lord, as he was commanded. 17The following were the sons of Levi, by their names: Gershon, Kohath, and Merari. 18These are the names of the sons of Gershon by their clans: Libni and Shimei. 19The sons of Kohath by their clans: Amram, Izhar, Hebron, and Uzziel. 20The sons of Merari by their clans: Mahli and Mushi. These are the clans of the Levites, by their ancestral houses.

21To Gershon belonged the clan of the Libnites and the clan of the Shimeites; these were the clans of the Gershonites. 22Their enrollment, counting all the males from a month old and upward, was seven thousand five hundred. 23The clans of the Gershonites were to camp behind the tabernacle on the west, 24with Eliasaph son of Lael as head of the ancestral house of the Gershonites. 25The responsibility of the sons of Gershon in the tent of meeting was to be the tabernacle, the tent with its covering, the screen for the entrance of the tent of meeting, 26the hangings of the court, the screen for the entrance of the court that is around the tabernacle and the altar, and its cords—all the service pertaining to these.

33To Merari belonged the clan of the Mahlites and the clan of the Mushites: these are the clans of Merari. 34Their enrollment, counting all the males from a month old and upward, was six thousand two hundred. 35The head of the ancestral house of the clans of Merari was Zuriel son of Abihail; they were to camp on the north side of the tabernacle. 36The responsibility assigned to the sons of Merari was to be the frames of the tabernacle, the bars, the pillars, the bases, and all their accessories—all the service pertaining to these; 37also the pillars of the court all around, with their bases and pegs and cords.

38Those who were to camp in front of the tabernacle on the east—in front of the tent of meeting toward the east—were Moses and Aaron and Aaron’s sons, having charge of the rites within the sanctuary, whatever had to be done for the Israelites; and any outsider who came near was to be put to death. 39The total enrollment of the Levites whom Moses and Aaron enrolled at the commandment of the Lord, by their clans, all the males from a month old and upward, was twenty-two thousand.

The Redemption of the Firstborn

44Then the Lord spoke to Moses, saying: 45Accept the Levites as substitutes for all the firstborn among the Israelites, and the livestock of the Levites as substitutes for their livestock; and the Levites shall be mine. I am the Lord. 46As the price of redemption of the two hundred seventy-three of the firstborn of the Israelites, over and above the number of the Levites, 47you shall accept five shekels apiece, reckoning by the shekel of the sanctuary, a shekel of twenty gerahs. 48Give to Aaron and his sons the money by which the excess number of them is redeemed. 49So Moses took the redemption money from those who were over and above those redeemed by the Levites; 50from the firstborn of the Israelites he took the money, one thousand three hundred sixty-five shekels, reckoned by the shekel of the sanctuary; 51and Moses gave the redemption money to Aaron and his sons, according to the word of the Lord, as the Lord had commanded Moses.

Did you know that Israel’s tabernacle tent was designed as a symbolic garden ...

Dr. Vince Bantu introduces Numbers, reflecting on what it means for God’s peo... 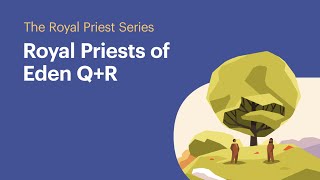 Why did God favor Abel’s offering over Cain’s? Tim and Jon collected question...

Watch our overview video on the book of Numbers, which breaks down the litera...

The Book of Numbers

In Numbers, Israel leaves Mt. Sinai only to rebel against God at every step. ...