1I SAID in mine heart, Go to now, I will prove thee with mirth; therefore enjoy pleasure: and, behold, this also was vanity. 2I said of laughter, It is mad: and of mirth, What doeth it? 3I searched in mine heart how to cheer my flesh with wine, mine heart yet guiding mewith wisdom, and how to lay hold on folly, till I might see what it was good for the sons of men that they should do under the heaven all the days of their life. 4I made me great works; I builded me houses; I planted me vineyards; 5I made me gardens and parks, and I planted trees in them of all kinds of fruit: 6I made me pools of water, to water therefrom the forest where trees were reared: 7I bought menservants and maidens, and had servants born in my house; also I had great possessions of herds and flocks, above all that were before me in Jerusalem: 8I gathered me also silver and gold, and the peculiar treasure of kings and of the provinces: I gat me men singers and women singers, and the delights of the sons of men, concubines very many. 9So I was great, and increased more than all that were before me in Jerusalem: also my wisdom remained with me. 10And whatsoever mine eyes desired I kept not from them: I withheld not my heart from any joy, for my heart rejoiced because of all my labour; and this was my portion from all my labour. 11Then I looked on all the works that my hands had wrought, and on the labour that I had laboured to do: and, behold, all was vanity and a striving after wind, and there was no profit under the sun. 12And I turned myself to behold wisdom, and madness and folly; for what canthe man dothat cometh after the king? eventhat which hath been already done. 13Then I saw that wisdom excelleth folly, as far as light excelleth darkness. 14The wise man’s eyes are in his head, and the fool walketh in darkness: and yet I perceived that one event happeneth to them all. 15Then said I in my heart, As it happeneth to the fool, so will it happen even to me; and why was I then more wise? Then I said in my heart, that this also was vanity. 16For of the wise man, even as of the fool, there is no remembrance for ever; seeing that in the days to come all will have been already forgotten. And how doth the wise man die even as the fool! 17So I hated life; because the work that is wrought under the sun was grievous unto me: for all is vanity and a striving after wind. 18And I hated all my labour wherein I laboured under the sun: seeing that I must leave it unto the man that shall be after me. 19And who knoweth whether he shall be a wise man or a fool? yet shall he have rule over all my labour wherein I have laboured, and wherein I have shewed wisdom under the sun. This also is vanity. 20Therefore I turned about to cause my heart to despair concerning all the labour wherein I had laboured under the sun. 21For there is a man whose labour is with wisdom, and with knowledge, and with skilfulness; yet to a man that hath not laboured therein shall he leave it for his portion. This also is vanity and a great evil. 22For what hath a man of all his labour, and of the striving of his heart, wherein he laboureth under the sun? 23For all his days are butsorrows, and his travail is grief; yea, even in the night his heart taketh no rest. This also is vanity. 24There is nothing better for a man thanthat he should eat and drink, and make his soul enjoy good in his labour. This also I saw, that it is from the hand of God. 25For who can eat, or who can have enjoyment, more than I? 26For to the man that pleaseth him Godgiveth wisdom, and knowledge, and joy: but to the sinner he giveth travail, to gather and to heap up, that he may give to him that pleaseth God. This also is vanity and a striving after wind.

The Book of Ecclesiastes

In Ecclesiastes, we hear the skeptical voice of “the teacher.” He observes th... 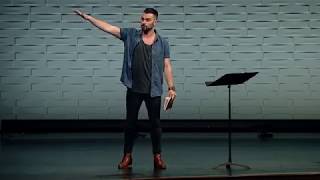 The Vanity of Pleasure

Guy Mason, from City on a Hill Church in Melbourne, Australia, talks about th...

Watch our overview video on the book of Ecclesiastes, which breaks down the l...